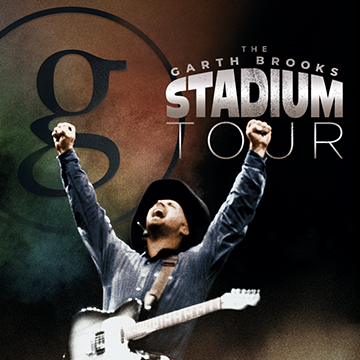 In 2004 when Garth Brooks announced he was stepping away from music to spend more time with his children, he famously told the crowd at his final concert at the Spirt Center in the US ‘I promise, if you wait for me, I’ll be back’.

Ten years later in 2014 he made good on that promise, returning to the world stage with a red hot tour which saw him sell out arenas across the US. Lasting three-and-a-half-years the Garth Brooks World Tour with Trisha Yearwood, sold over 6.3 million tickets, making it the biggest North American tour in history. In March 2019 he then rolled out The Garth Brooks Stadium Tour, which has set new stadium attendance records at every venue so far, with Pollstar deeming it the best-selling country music tour of 2019.

He was most certainly back.

Garth has made good on that promise once more, as Aiken Promotions announced that he will be returning to play Croke Park Dublin for five dates this September

Garth Brooks is the #1-selling solo artist in U.S. history, certified by the RIAA with 157 million album sales.

The first and only artist in history to receive nine RIAA Diamond Awards for the now nine albums certified at over 10 million, Garth is also the first-ever seven-time recipient of the CMA Entertainer of the Year award. In May 2021, he received one of the most prestigious honours an artist can receive, The Kennedy Center Honor and was recently, also awarded Country Touring Artist of the Decade at the 2021 Pollstar Awards.

Garth has 20 Billboard #1 singles to his credit. In March 2020, Billboard announced that he was the first artist to garner top-5 singles at country radio (across Billboard and Mediabase charts) across five consecutive decades–the 80s, 90s, 00s, 10s and 20s. His run on the airplay charts began with his first single, “Much Too Young (To Feel This Damn Old)” in 1989 and has continued most recently with “Dive Bar,” his duet with Blake Shelton. During that time, his music has filled the radio airwaves with timeless classics that earned a place in the American songbook, including “The Dance,” “Friends in Low Places,” “The River,” and “If Tomorrow Never Comes.”