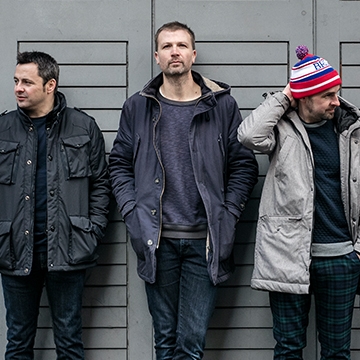 Bell X1 bring a very special weekender to Vicar Street once again, drawing upon acoustic, full band and Dowry Strings performances. “We’re delighted to be heading back to our spiritual home in Dublin with 3 special shows and some new material to try on. A full fat full band standing show, a seated show with those Dowry Strings, and a seated acoustic show with just us three little maids from school…” – Paul Noonan.

Bell X1 is an Irish band, the members of which are Paul Noonan, Dave Geraghty and Dominic Phillips. Formed in 1999, they have released 7 studio albums, 4 of which having been nominated for the Choice Music Prize. Over the past 2 decades they have become somewhat of a national treasure, and are recognized as one of Ireland’s most popular live performers. They are known for their versatile musical palette, lyrical dexterity and catalogue of popular singles. Their albums vary in sound and style, their range taking in pop, alternative, indie, hard rock, post-punk, acoustic, lo-fi, folk-rock, ballad, synth-pop, new wave and electronica.

A pre-sale will be offered to Bell X1 mailing list subscribers allowing them to scoop a limited number of tickets early.   If you are not already a member please sign up here ( http://bellx1.com/mailinglist/ )  to receive a pre-sale link on Wednesday October 6th.